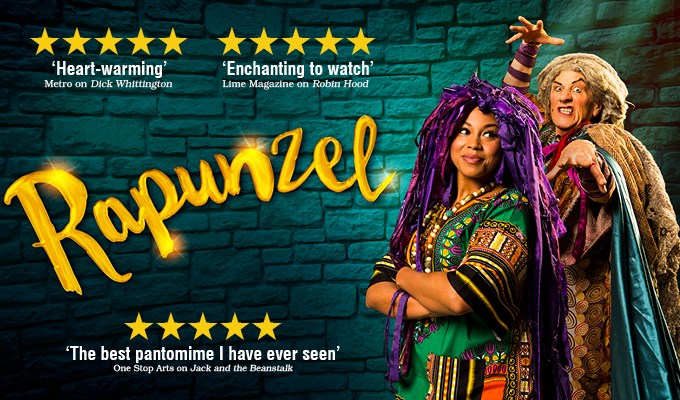 With a tradition of featuring original music, laugh-out-loud comedy and hilarious audience participation, Theatre Royal Stratford East’s annual pantomime returns for Christmas 2017. Let your hair down with the feisty Rapunzel and friends in a magical re-imagining of this much-loved tale. #RapunzE15 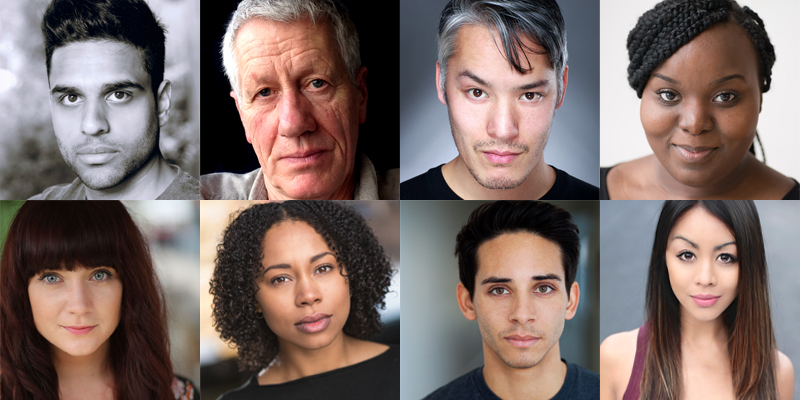 Raj Bajaj His theatre credits include Lions & Tigers, The Merchant of Venice (Shakespeare’s Globe), Bend It Like Beckham (Phoenix Theatre), Treasure Island (National Theatre), The Djinns of Eidgah (Royal Court), Much Ado About Nothing (Royal Shakespeare Company); and for television, Doctor Who, and The Garden.

Michael Bertenshaw returns to Theatre Royal Stratford East to play Witch Maddy in his 14th pantomime at the theatre. For Theatre Royal Stratford East his credits include Sinbad the Sailor, Robin Hood, Dick Wittington and The Hotel Cerise. Other theatre credits include The Merchant of Venice, The Taming of the Shrew, All’s Well That Ends Well, Anne Boleyn and Henry VIII (Shakespeare’s Globe). For television his credits include Maxxx, The Rebel, The Miniaturist, The Crown, Messiah III, William and Mary and The Brief; and for film; The Da Vinci Code, Flyboys, Bust, Another Life and Intimate Relations.

Stephen Hoo Previous credits for Theatre Royal Stratford East include Take Away and Cinderella. Other theatre credits include Running Wild (Chichester Festival Theatre), The Sugar Coated Bullets Of The Bourgeoisie (Arcola Theatre/High Tide), Heartquake (Royal Court Theatre) and Soho Streets (Soho Theatre). For television his credits include Vicious, Excluded, Day of The Kamikaze; and for film, Fit, Kick Off and Seven Dials.

Juliet Okotie Previous credits for Theatre Royal Stratford East include Chicken Palace and STEP. Other theatre credits include The Interrogation of Sandra Bland (Bush Theatre), One Woman's Slide: A Blues and Sweet Taboo (Talawa Theatre Company); and for television, Meet the Adebanjos.

Gemma Salter Her previous credits for Theatre Royal Stratford East include Come Dancing, Hansel and Gretel, Red Riding Hood, Aladdin, Jack and the Beanstalk and Sinbad the Sailor. Other theatre credits include Dreamboats and Petticoats (Playhouse Theatre), One Man, Two Guvnors (Haymarket Theatre) and Made in Dagenham (Adelphi Theatre); and for television, Rock and Chips and Call the Midwife.

Gary Wood His credits for Theatre Royal Stratford East include The House of In Between, The Infidel – the Musical and Kali’s Toenail. Other theatre credits include A Pacifist's Guide to the War on Cancer, Our Country's Good and Dara (National Theatre), A Chorus Line (London Palladium), The King and I (UK tour and Curve) and Wicked (Apollo Victoria Theatre); and for film, World War Z, Walking On Sunshine and Faster, Higher, Stronger, Straighter.

Trish Cooke is a writer and actress. Trish writes for theatre, TV, film and radio. Theatre Royal Stratford East credits include:  Robin Hood (2015), Dick Whittington (2013), Cinderella (2011), Red Riding Hood (2010), Aladdin (2009), the Olivier Award nominated Cinderella (2007), Pinocchio (2005), Gulp Fiction (1996), and Running Dream (1993). Other stage credits include: Anansi (Talawa Theatre Company, 2007) and Back Street Mammy (Lyric, Hammersmith 1990 and West Yorkshire Playhouse 1992). Trish’s short play LEFT HANGIN’ was performed as part of Black Lives, Black Words at The Bush Theatre in October 2015. Trish has written twenty children’s books, including Full, Full, Full of Love (Walker Books); Hey Crazy Riddle (Frances Lincoln); Catch (Scholastic); How Anansi Got His Stories (Oxford University Press) Mammy Sugar Falling Down (Century Hutchinson), King Kafu and the Moon (Pearson), Zoom! (Harper Collins), Mr Pam Pam And The Hullabazoo (Walker Books) and So Much (Walker Books). So Much has won many awards including the Nestle Smarties Book Prize, the She/WH Smith’s Under Fives Book Prize. In 2016 So Much was voted one of the 100 Best Children’s Books by Time Out. Trish’s latest book, Tales From The Caribbean (Puffin/Penguin) was published in August 2017. For TV, Trish’s writing work includes: story lining for Emmerdale (ITV); scriptwriting for EastEnders (BBC); Doctors (BBC); The Real McCoy (BBC), Get Up Stand Up (Ch 4); PlayDays (BBC) and she was one of the original writers on The Tweenies (CBBC). Trish was Writer in residence for BBC North 2002/2003 and she has written several plays for BBC Radio including a mini series called UNSPOKEN, which was broadcast in 2002/2003. She has had 2 short films produced by Screen Yorkshire. WHERE AEROPLANES GO TO DIE starring Cathy Tyson was shown in Cannes in 2007.

Robert Hyman has worked extensively at Theatre Royal Stratford East for the last 17 years both as a Composer and Musical Director. That body of work includes music and lyrics for Cinderella (Olivier Award nominated), Pinocchio, Aladdin, Red Riding Hood and Dick Whittington (with Trish Cooke), as well as songs for The Snow Queen and Hansel and Gretel, and scores for 20,000 Leagues Under The Sea and Make Some Noise. He was also Musical Director for the hit musicals Tommy (Ramps on the Moon), The Big Life (Including West End), Come Dancing and Takeaway (all Theatre Royal Stratford East) as well as all Theatre Royal Stratford East pantomimes since 1998. Other projects include conducting a choir of 5000 at the O2; Musical Director for World Children’s Ensemble (Royal Albert Hall) and Reasons to be Cheerful (UK tour).

Pooja Ghai is the Associate Director at Theatre Royal Stratford East. For Theatre Royal Stratford East her credits include Counting Stars, The House of In Between, Home Theatre and Angelic Tales. Other theatre credits as a director include Lions and Tigers (Sam Wanamaker Playhouse), The Empress (The Embassy Theatre), Vestige for Wayne Parsons Dance (Wilton’s Music Hall, Rich Mix and 2018 tour), Tamasha 25, Shakti & Seva, Mother India (Rich Mix), 13 (Corbett Theatre), As You Like It (Ellen Terry Theatre), The Accordian Shop (Curve), The Tune is Always Better on the Outside, Oysters, Mirad a boy from Bosnia (The Bedford) and The Difference (Soho Theatre). Theatre credits as an associate/assistant director include The Infidel The Musical (Theatre Royal Stratford East) and The Memory of Water (UK tour).