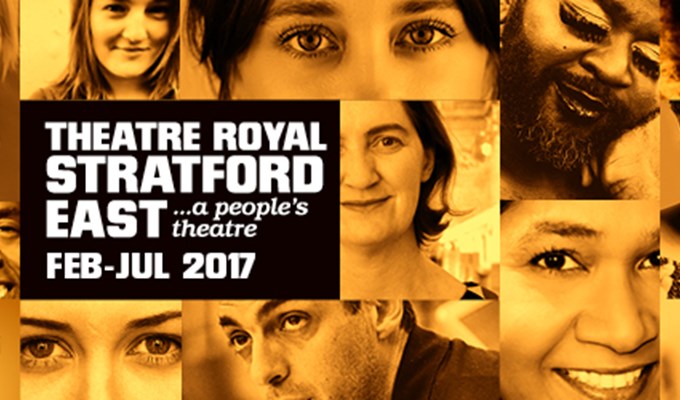 The season opens with the European première of Kirsten Childs’ funny and moving award-winning musical The Bubbly Black Girl Sheds Her Chameleon Skin. The story follows Viveca, a young African American girl from LA, who has to fight racism and sexism and goes on to learn her self-worth and follow her dreams. This marks celebrated director and actress Josette Bushell-Mingo’s return to London.

Following that the theatre welcomes its first visit from cabaret legend Le Gateau Chocolat with his life portrait Black, and 201 Dance Company’s queer hip-hop dance piece Smother which opens in April after an acclaimed sell-out run at the 2016 Edinburgh Fringe Festival and an international tour.

May brings the world première of the stage adaptation of Emma Donoghue’s book Room featuring original songs by songwriter Kathryn Joseph and Cora Bissett. Donoghue adapts her bestseller into a play which she previously adapted into a multi-award winning film. Room is a Co-Production between Theatre Royal Stratford East and Abbey Theatre, Dublin in association with National Theatre of Scotland and Covent Garden Productions.

The Who’s multi-award winning rock musical Tommy runs from 7 – 17 June after premièring at the New Wolsey Theatre, Ipswich and will be directed by Theatre Royal Stratford East’s Artistic Director Kerry Michael. This marks the second production from Ramps on the Moon following last year’s success with The Government Inspector. It features a cast of 22 disabled and non-disabled performers and practitioners.

The National Theatre’s new production My Country; A Work in Progress opens at Theatre Royal Stratford East on 19 June and marks the only other London date on the tour. Rufus Norris directs Carol Ann Duffy’s dramatisation of accounts from people around the UK and Ireland in response to the EU Referendum result. The production premières at the National Theatre’s Dorfman Theatre in February.

Concluding the season in the main house is the world première of Rikki Beadle-Blair’s new play Summer in London – a romcom with an all transgender cast described as a cross between On The Town, Roman Holiday and The Inbetweeners.

In addition, Thisbe runs at Gerry’s from 21 – 25 February. Samantha Sutherland’s follow up to A Midsummer Night’s Dream has BSL built in to every performance and features an original score.

The theatre’s renowned pantomime has been confirmed as Rapunzel starting in November 2017. There are also return visits from National Theatre Connections, MonologueSlam UK and Stratford East Singers.

Artistic Director of Theatre Royal Stratford East, Kerry Michael said today, “Our new season is a chance to give attention to those voices on the fringes of the mainstream, to celebrate the genius of outsiders and shine a light on those with an alternative story to tell. This season highlights diverse communities and cultures with the aim of making theatre as inclusive as it possibly can be. In a time of huge change around the world, which for some brings uncertainty and fear, we salute the theatre makers working in this new season, striving to create unique stories and exceptional shows that can help us understand our neighbours, bringing us together and in our own small way make our world a better place.”